We have previously reviewed a couple of popular golf smartphone apps – Hole 19 and Free Caddie. We liked both of them, especially the minimalism show by both to different degrees.

Today we tried out an established, very popular choice for golf apps – Google “best golf app” and you will quickly find a lot of people signing the praises of GolfLogix.

I’ll just get it straight out the way – I didn’t like GolfLogix. I will explain why and talk about it but it is best just to be upfront. It just didn’t grab me.

I think it is mainly a question of aesthetics as, even though I didn’t really explore the depths of options available, it clearly has a lot of functionality. 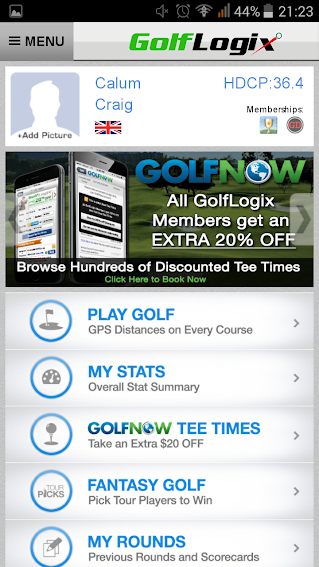 It is just too busy and cluttered for my liking. And there’s adverts! There is a paid for option (as with Free Caddie) which I presume will lift the adverts. I know ads are somewhat unavoidable with free apps but if they have to be there, I really would prefer them to be less intrusive.

The main menu at the side of the screen give you the option to play golf amongst a host of other functions: 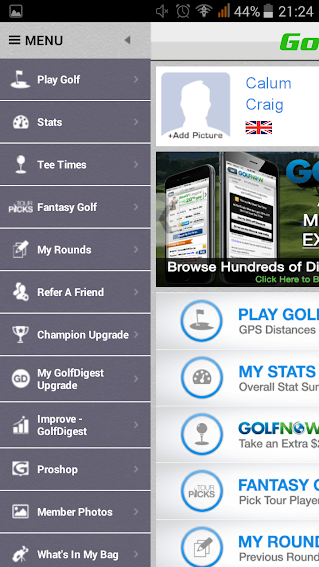 On to the game.

After finding your course – you can search by name or find it nearby via GPS – you choose a few options such as which tees you are playing from (at the course I played today there was no option but I would imagine that is because it is a fairly obscure course; I had to map it myself on Free Caddie after all!).

You then get a Google Maps view of the course with the pin highlighted and distance displayed. There is a target you can move around and it will give you the distance – handy if you’re not quite sure if you can carry that fairway bunker. 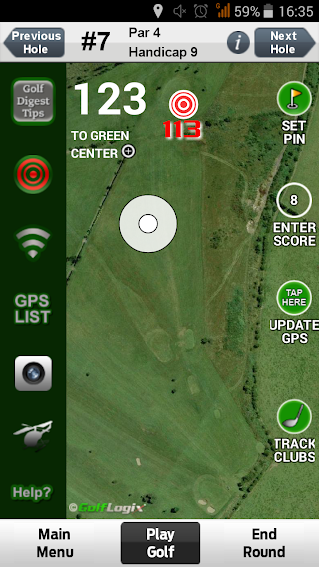 You can also hit an icon to bring up more detailed ranges to the green – the display switches to a close up of the green and you get distance to front, centre and rear. This works just as Free Caddie and was the function I used most frequently. The course I was playing on is quite well known to me now so I didn’t really need to check distances to tress etc. 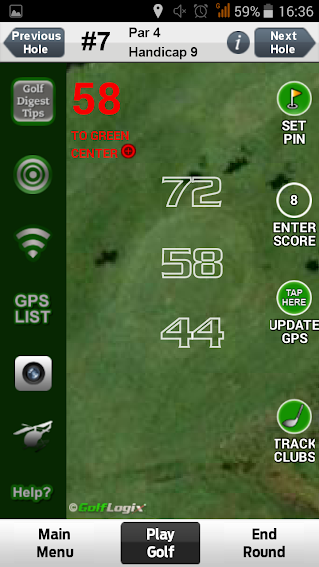 As a rangefinder it works OK – the only complaint I can have is the same one I had with Hole 19 – the lag on getting a new GPS lock when you pull your phone out of your pocket for that second/ third shot. There was a noticeable delay in the yardage reflecting the actual situation. Moreover there is a clickable button “update GPS”, the presence of which bothered me. It doesn’t fill you with confidence if an app gives you the facility to update your GPS – it wouldn’t do so if you weren’t going to need it after all…

Unlike Free Caddie and like the other golf apps I have tried out, GolfLogix gives you the ability to keep track of your (and your playing partners’) scores. Again, this works fine but I did find the entry screen a bit clunky. There are a range of advanced options you can track such as fairways made but for me I just want my score and number of putts.

For me, GolfLogix just tries to do too much – and with (IMO) a not very appealing interface. I didn’t like the design of the app at all and often didn’t find the option for what I wanted to do obviously. I have to say that I much prefer the clean layout of Hole 19. It functions fine as a rangefinder but if that is all I want to use, I will stick with Free Caddie – it does basically one thing and does it well.

At this juncture, I think I am going to stick with Free Caddie for a rangefinder on courses I know (ie I am familiar with the terrain and just need distances to the green) and a pencil for scoring. I tracked my whole season on Golfshake last season and am reluctant to committing to another system for building up my round history.

The app that might change things is the forthcoming Golfshake one:

When I play new courses where I might want a bit more detail I am currently sticking with Hole 19 – I noted one or two niggles but as an overall scorer + rangefinder I definitely prefer it to GolfLogix.

Apparently GolfLogix has over 3 million registered users and I can see that if you got into the more advanced functions and became part of the community (it includes a fantasy golf for example) you could get a lot out of it. I’m afraid the style of the app just put me off and I don’t feel I need a lot of the functionality that it offers.

This entry was posted in App and tagged Apps. Bookmark the permalink.