This week, the Scottish World of Golf team had a round at Greg’s “home” course. (He is a member there but doesn’t live so locally these days – Barhsaw Park is literally out his backdoor.) Dougalston golf course is now part of the Virgin Active gym situated just outside of Milngavie which also has tennis and other racquet sports facilities.

I played there once last summer just a couple of months after getting back to into golf and found it a tough round. One year and many rounds later, I was hoping it would be easier this time round…

This is the scorecard for the course from the yellow tees: 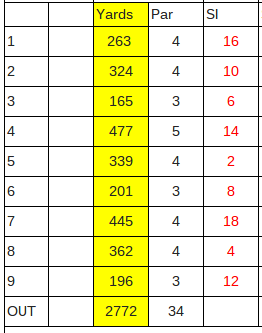 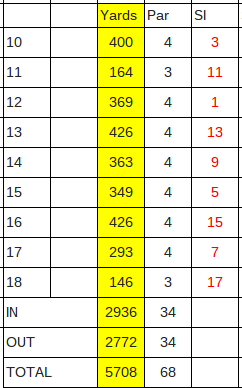 Greg had previously told me about the drainage issues at Dougalston – he struggles to play there at all during the winter months. But, in July, surely we’d be fine…? There had been heavy rain the night before so we were worried that the course might not be in such good condition but when we got out there it seemed OK – there were certainly a few damp patches but it was perfectly playable.

But, this was July – really you’d hope it wouldn’t even be an issue at this time of year. Unfortunately it is in the west of Scotland…

Anyway, the course itself is a rather nice one, laid out across a few hills and within fairly dense woodland. This means that the fairways are generally tree lined but some are fairly wide. The course is quite hilly but I like that as it adds some interest – as does the frequent water hazards to be found all round the course. 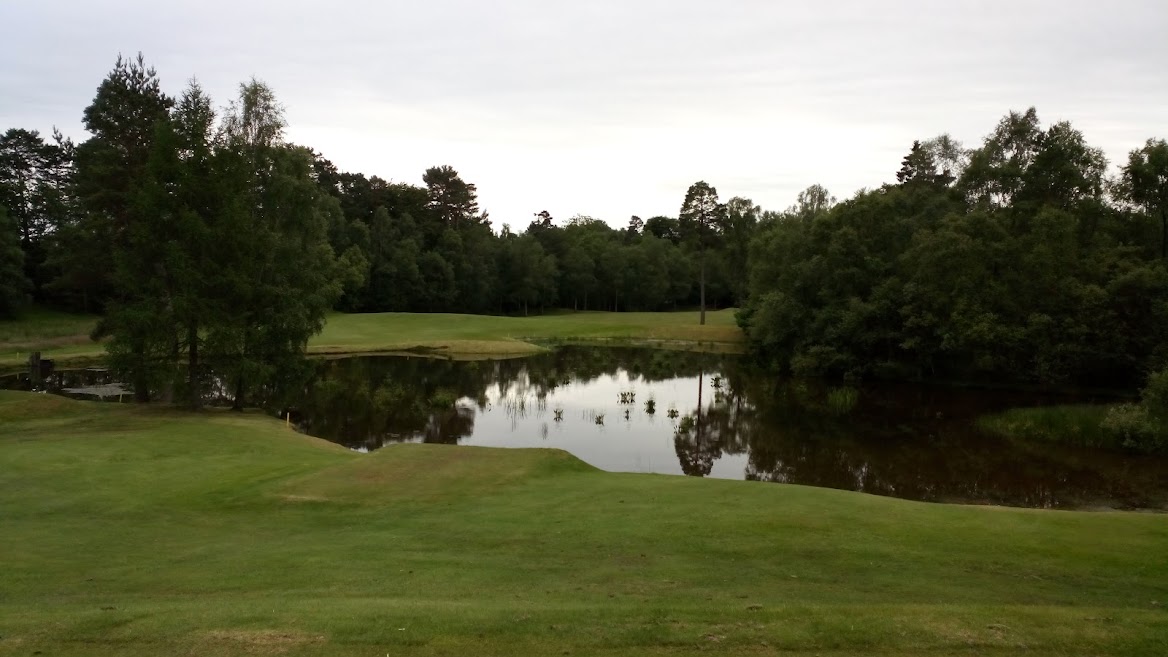 From the first tee you face a drive over a large pond to a fairly short par 4. 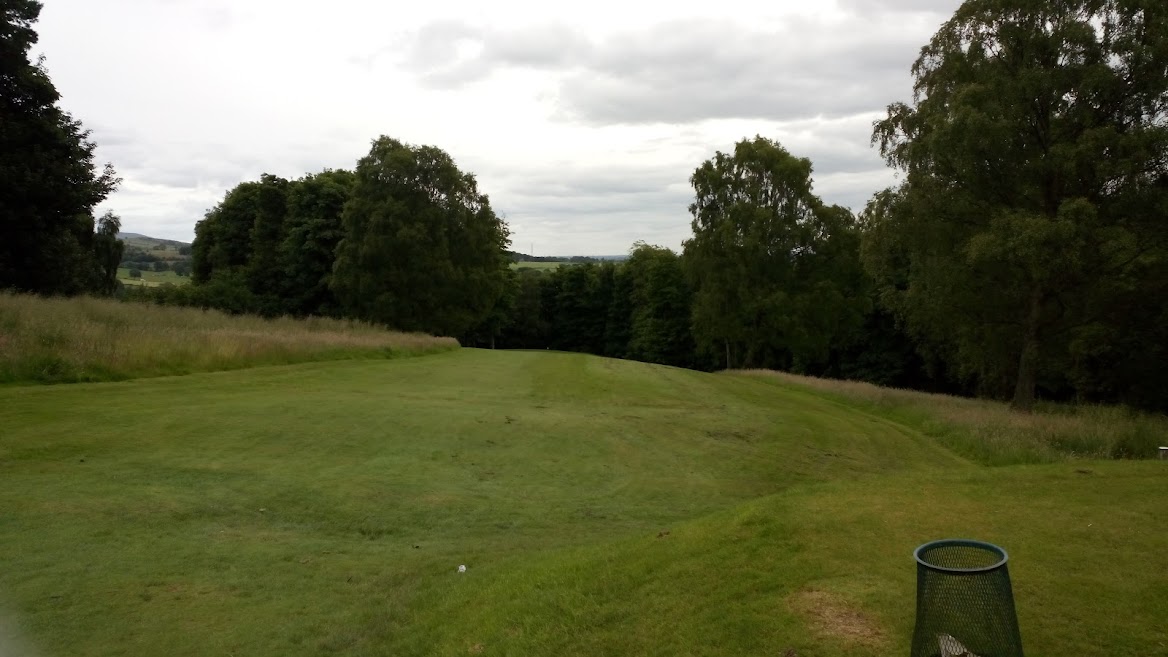 There’s a green down there somewhere. This is the 11th hole. It’s a 164 par 3 but as you can see you have the advantage of a fair bit of height and the fairway runs down to the green.

But, sometimes you have to go back up hills: the 9th, “Mickle Ben”. 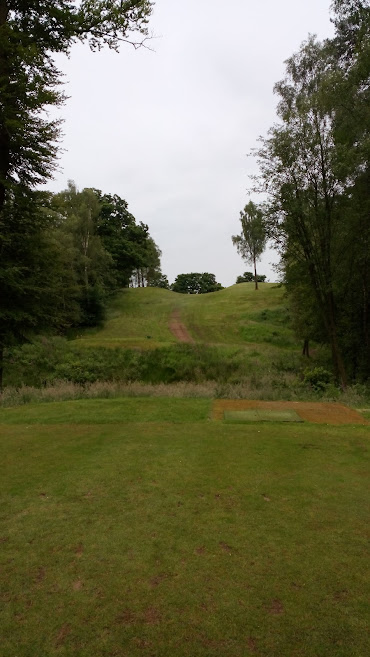 Dougalston is one of those courses where quite a few holes have greens that are out of sight from the tee and / or fairway so you find many of those X shaped markers to give you an indication of where to aim. There are also a number of bells to be rung after you pass by.

So, not a course to be played if you are not up to a spot of hillwalking! I like the ups and downs though, I think it gives the course more interest than a flat one.

In addition to the general hilliness of the course, most of the fairways are quite undulating, not completely unlike those of links courses. (Unfortunately though, Douglaston most definitely does not have sandy, fast draining soil…) This means that you are frequently playing approach shots where the ball is above or below your feet which adds another element of challenge.

A number of holes at Dougalston have water hazards – from the pond at the first above (which possibly might come into play on the 18th if you really slice the ball) to the one guarding the green on the 8th. I also like water hazards, as long as I don’t end up in them too often – again it gives the course interest and a different aspect to be factored into your course management strategy. 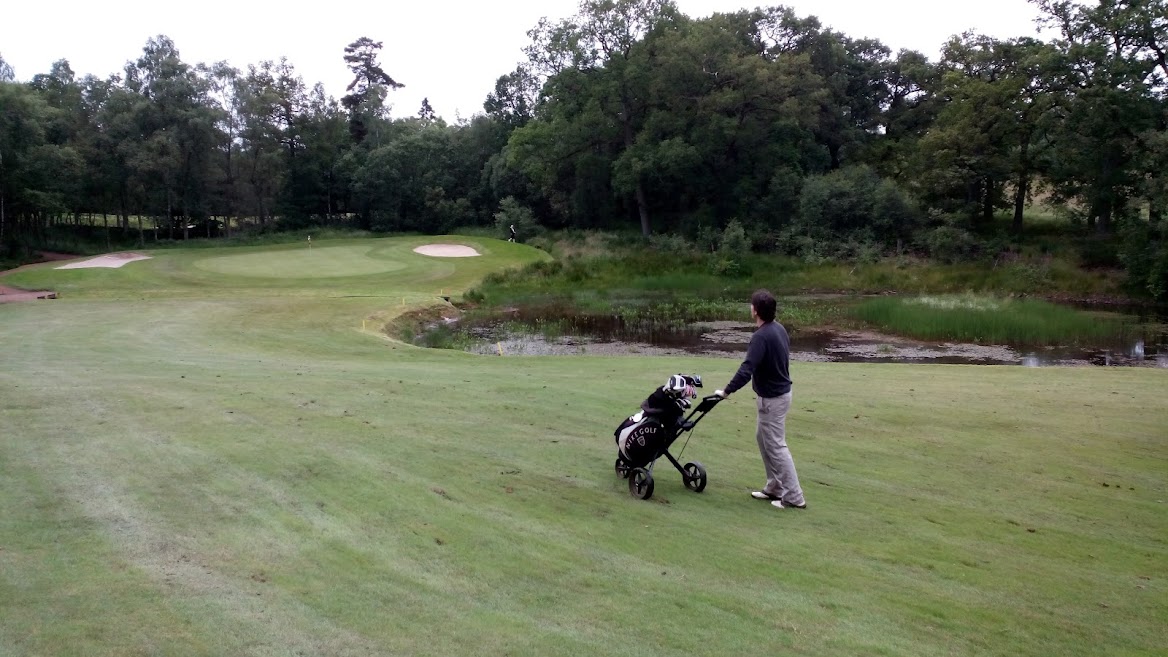 I think Dougalston is a really nice course. It reminds me of some of the courses I have played in Japan and England, in that it winds its way around through pretty dense woodland, up and over and back down hills. The land it is built on must presumably have been a private estate at some point in the past as you will even find a former dovecot on the 13th fairway. 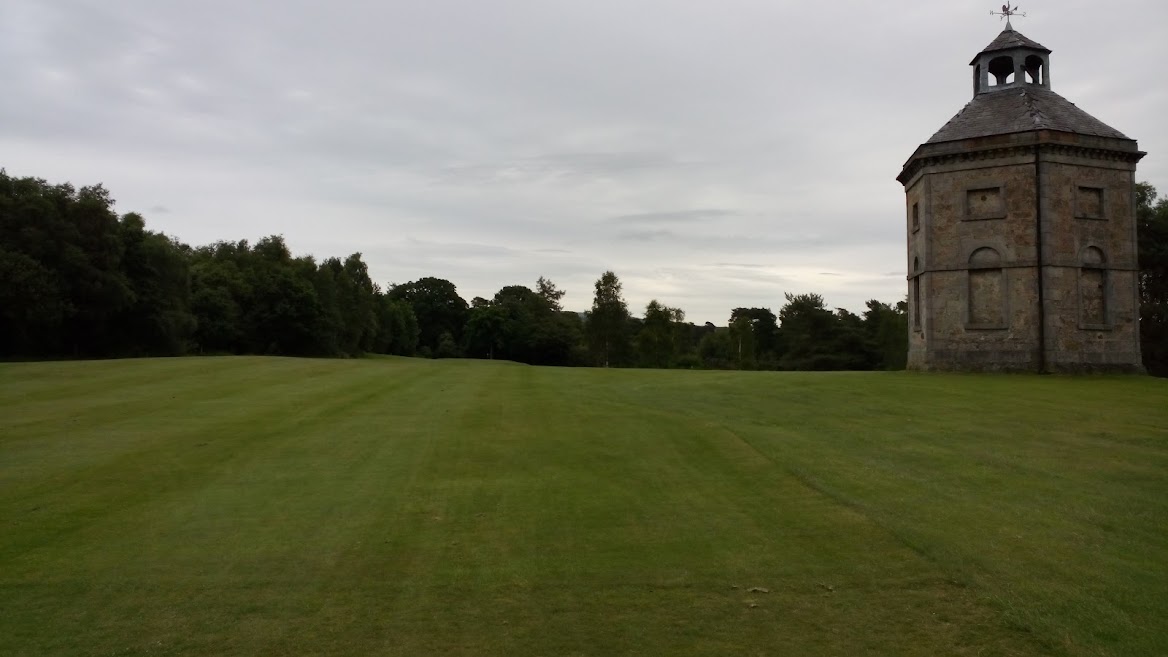 For me, Dougalston is a pretty challenging due to the trees’ close proximity to most of the fairways. If you can keep your drives relatively straight though you definitely will enjoy this course.

As alluded to above though, the worst thing about Dougalston is the (lack of) drainage. We played the day after some heavy rain and it was generally OK but there were spots which were quite soggy. It is easy to see that if there were rain for more than a few days (and let’s face it, this is a common occurrence in this part of the world) the fairways could get extremely soggy and your balls plug.

So, if you can keep your drives reasonably straight and the weather hasn’t been too wet, I think you will really enjoy Dougalston. It is a course with a lot of character and challenge and I would anticipate it being pretty touch to play to your handicap here (I don’t have one and didn’t score on the day so can’t comment). There are tee off times on Golfshake for £15 and at that price I would say it is a bargain – just monitor the weather when you are planning your round!

This entry was posted in Courses and tagged Course review. Bookmark the permalink.